Former teacher sentenced to 10 years for having sex with students 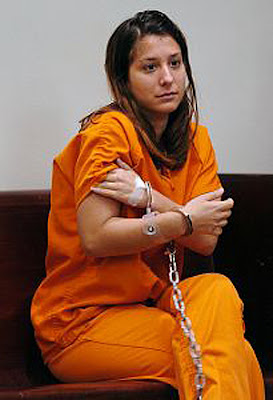 Only in America. This Florida judge, Chet Tharpe, shows himself to be truly barbarian in his punishment of this teacher. Granted she did something deserving of losing her job, and never teaching again, but the penalty of this judge is outlandish and inappropriate, like so much of what comes out of our country. Why not hunt witches? Lynch shoplifters? The young boys, 14 and 16 years of age, could have been more scarred if they had been beat up at school or countless other common events in the life of a young man. Many young boys of this age have sex, and it might be illegal, still, 10 years? 15 years probation as a sex offender?
Of course this fits with the current fascist American mindset of locking away any "deviants", and waging war on the world. That she appears in court shackled with chains and wearing her "scarlet letter," an orange jumpsuit, is outrageous and only highlights the barbarity, not of her supposed crime, but of our vindictive society which apparently has changed little since the days of Nathaniel Hawthorne.

(CNN) -- A judge in Tampa, Florida, on Monday sentenced Stephanie Ragusa, a former middle school math teacher, to 10 years in prison for having sex with two underage students in 2008.
"As parents, we place our trust in teachers to provide a safe environment in which our children can learn," Hillsborough County Circuit Judge Chet Tharpe said in handing down the sentence. "You violated that trust in the worst imaginable way."
Tharpe also sentenced Ragusa to 15 years of sex offender probation following her prison time.
Ragusa, 31, pleaded guilty in April to three counts of lewd and lascivious battery in a March 2008 case involving a 14-year-old boy, and two counts of having unlawful sex with a minor in an April 2008 case involving a 16-year-old student.
Ragusa has been in jail since she was arrested in 2008 leaving one of the victims' homes...

In a statement before her sentencing, an emotional Ragusa -- wearing an orange jumpsuit and shackled at her hands and ankles -- expressed remorse for her actions.
"I'm sincerely sorry for the pain and aggravation I have caused to the victims and their families," she said...
Posted by George at 9:23 PM