The privileged daughter of a prominent city doctor, and her boyfriend — a Harvard grad and Occupy Wall Street activist — have been busted for allegedly having a cache of weapons and a bombmaking explosive in their Greenwich Village apartment.
Morgan Gliedman — who is nine-months pregnant — and her baby daddy, Aaron Greene, 31, also had instructions on making bombs, including a stack of papers with a cover sheet titled, “The Terrorist Encyclopedia,’’ sources told The Post yesterday.
People who know Greene say his political views are “extreme,” the sources said.
Cops found the stash in the couple’s West Ninth Street home Saturday when they went there to look for Gliedman, 27, who was wanted for alleged credit-card theft.


A detective discovered a plastic container with seven grams of a white chemical powder called HMTD, which is so powerful, cops evacuated several nearby buildings.

Meanwhile a Gothamist article says that the cops originally found the explosives in an ashtray....ah ha....
As if an explosion in SoHo weren't fun enough today, three buildings in Greenwich Village were apparently evacuated this morning after cops found what they believe was explosive powder in one apartment.
Cops went to a residence on 9th Street between Fifth and Sixth Avenues at around 8:20 a.m. today to look for a woman, when they say they saw some suspicious white powder in an ashtray. They brought the powder to a police firing range for testing, and also reportedly found a shotgun along with two handgun magazine clips.
The street was partially blocked off, and three buildings were evacuated as a safety precaution. Two people, a man and a woman, are reportedly in custody, but police said they had no information when we contacted them. We will update when more information becomes available.

Posted by George at 6:35 PM No comments:


"An identified [redacted] of October planned to engage in sniper attacks against protestors in Houston, Texas, if deemed necessary. An identified [redacted] had received intelligence that indicated the protesters in New York and Seattle planned similar protests in Houston, Dallas, San Antonio, and Austin, Texas. [Redacted] planned to gather intelligence against the leaders of the protest groups and obtain photographs then formulate a plan to kill the leadership via suppressed sniper rifles."

Oliver Stone: 'US has become an Orwellian state'

Police scanner conversation includes "End the life of Adam..." i.e. Adam Lanza....that comes at 5 minutes in. At 45 seconds there is a report of "two shadows running past the building." Go to the link below if you want to hear a slowed down version of the "Adam" quote as well.


There are some things worthy of attention, things which do not add up for me about the recent Sandy Hook tragedy. Let's have a look at them.

First let's start with this. Some postings on Godlike Productions revealed that a local newspaper originally quoted the principal of the school after the shootings, describing a masked gunman who opened fire at the school. 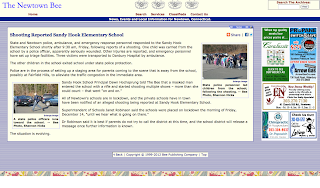 The only problem with that is however that the principal was declared killed by the gunman in most mainstream media accounts...

Then there is this strange video of a parent who smiles and laughs before suddenly getting emotional as the cameras are running. 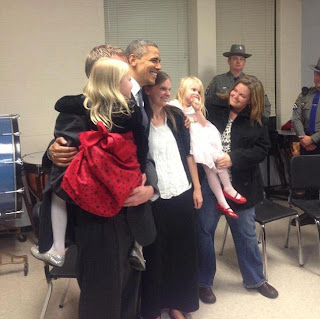 If that wasn't strange enough, why all the smiles from this family with the president during a photo op. Didn't they just lose a daughter?

And this all coming on the heels of the strange 'Batman Shooting' where the movie theater alarm system announced "Murder in the theater, murder in the theater..."
The perpetrator in that case being a neuroscience student who sits with orange hair in the courtroom too drugged up to talk. I don't make this stuff up. How did a nice seeming neuroscience student suddenly get all those weapons and riot gear and booby trap his apartment without 'help'? And then what about this?

But now comes the really shocking stuff which ties both massacres together and seems to prove they are the work of a bigger network and not lone gunmen.

And finally this. A review of a slasher movie called "Sandy Hook Lingerie Party Massacre" which apparently was written on the day of the Batman massacre.

It would seem as if both massacres were part of a larger sinister, the word must be used, conspiracy.
Posted by George at 1:55 PM 1 comment:

President "Fake" Does It Again...

Alex Jones and his team put together a great little video here pointing out the hypocrisy in someone like President Obama. He is a figurhead for the masses, holding their hand as they grieve, saying nice things about dead children. Of course this is a man, along with his administration and supporters, responsible for hundreds of dead children throughout the world, tens of thousands of dead civilians etc...So basically his 'compassion' should give you the creeps.

Posted by George at 9:17 AM No comments:

Tweeting the History of Drone Stikes....and it's taking a long time...

An NYU student is tweeting the history of U.S. drone strikes largely carried out under our peace prize winner president...the killing takes a long time to document with tweets.

Posted by George at 8:36 AM No comments:

US repeats same tired, desperate accusations that the Syrian army is preparing to use "chemical weapons."