Click on the picture below to enlarge. A must see. 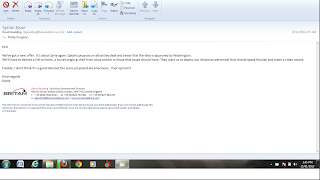 Sandy Hook Mystery Man Identified; Why Did This Off Duty SWAT Officer Armed With A Gun Run Off Into The Woods Instead Of Helping The Students?

From Before It's News.


The mysterious man shown being pursued by the police after the Sandy Hook shooting in this video has been 'identified' as an off-duty AND ARMED tactical squad police officer from another Connecticut district, according to the Newtown Bee.:

A man with a gun who was spotted in the woods near the school on the day of the incident was an off-duty tactical squad police officer from another town, according to the source.

Posted by George at 7:38 AM No comments:

The NDAA Legalizes The Use Of Propaganda On The US Public

If the NDAA goes into effect in its current form, the State Department and Pentagon can go beyond manipulating mainstream media outlets and directly disseminate campaigns of misinformation to the U.S. public.


This article is old. The bill was signed into law over New Years by Obama. Are you reading the news or a psychological operation? Happy New Year. How will you know?
Posted by George at 10:14 AM No comments:

By Melissa Powell
381-8621
PEARISBURG -- Giles County schools will be closed Wednesday to give law enforcement officials an opportunity to brief teachers and school administration about a website that mentions Narrows schools in a discussion about the Sandy Hook Elementary shootings in Newtown, Conn.

At a news conference held this afternoon in the Giles County Courthouse, Sheriff Morgan Millirons said that although no threat has been made against any Giles County school, officers felt it was important to take the information seriously.

Millirons said Virginia State Police informed local law enforcement last week that they had received a tip about an article on a website that pointed out that "Sandy Hook" was referenced on a map in a scene from the Batman movie "The Dark Knight Rises." Also on the map in the movie was "Narrows," Millirons said.

The article, which is still posted on www.revelationnow.net, refers to the mass shootings at a Colorado movie theater last year during a showing of the Batman movie, the Connecticut school massacre last month and a possible connection to Narrows schools. The headline is “The Next School Massacre Target?”

See also Strange Things About Sandy Hook...
Posted by George at 9:10 AM No comments: