Don't even get him started on the New York Times which, he says, spends "so much more time carrying water for Obama than I ever thought they would" – or the death of Osama bin Laden. "Nothing's been done about that story, it's one big lie, not one word of it is true," he says of the dramatic US Navy Seals raid in 2011....

"I would close down the news bureaus of the networks and let's start all over, tabula rasa. The majors, NBCs, ABCs, they won't like this – just do something different, do something that gets people mad at you, that's what we're supposed to be doing," he says.
Hersh is currently on a break from reporting, working on a book which undoubtedly will make for uncomfortable reading for both Bush and Obama.
"The republic's in trouble, we lie about everything, lying has become the staple." And he implores journalists to do something about it.

Posted by George at 1:21 AM No comments:

Posted by George at 2:18 PM No comments:

Former President and Commander-In-Chief: America Is No Longer a Democracy


Former U.S. President Jimmy Carter … in the wake of the NSA spying scandal criticized the American political system. “America has no functioning democracy,” Carter said Tuesday at a meeting of the “Atlantic Bridge” in Atlanta.
Posted by George at 1:50 PM No comments:

Russia suggests that war may be necessary to stop Monsanto.

The shocking minutes relating to President Putin’s meeting last month with US Secretary of State John Kerry reveal the Russian leaders “extreme outrage” over the Obama regimes continued protection of global seed and plant bio-genetic giants Syngenta and Monsanto in the face of a growing “bee apocalypse” that the Kremlin warns “will most certainly” lead to world war.
Posted by George at 3:09 AM No comments:

From The New York Daily News

And now, less than a day after the BuzzFeed and Rolling Stone reporter was killed in a fiery car crash, conspiracy theorists are speculating that there is more than meets the eye over Hasting's demise.
Twitter, Facebook, and sharing site Reddit were abuzz Wednesday, with some users commenting that it was suspicious that Hastings, who famously brought down U.S. Army Gen. Stanley McChrystal in a Rolling Stone cover story, died while in the middle of covering several hot-button topics like monitoring by the National Security Agency and the CIA.

Putin: "One should hardly back those who kill their enemies and eat their organs"


It's a sad state of affairs in the West indeed when it must be lectured on simple morality by Putin.
Posted by George at 3:56 PM No comments:


In a guest editorial for Spiegel Online on Tuesday, Justice Minister Sabine Leutheusser-Schnarrenberger said reports that the United States could access and track virtually all forms of Internet communication were "deeply disconcerting" and potentially dangerous.
"The more a society monitors, controls and observes its citizens, the less free it is," she said.
"The suspicion of excessive surveillance of communication is so alarming that it cannot be ignored. For that reason, openness and clarification by the U.S. administration itself is paramount at this point. All facts must be put on the table."
Markus Ferber, a member of Merkel's Bavarian sister party who sits in the European Parliament, went further, accusing Washington of using "American-style Stasi methods".
"I thought this era had ended when the DDR fell," he said, using the German initials for the failed German Democratic Republic.

Posted by George at 5:17 AM No comments:

Posted by George at 7:56 PM No comments:

The Bilderberg meeting is officially underway today, many protesters have arrived, as have reporters from the London Times, the BBC, and even members of the European Parliament.
Many of them are massing around Alex in the protest area, asking him questions. Alex is on fire, with direct, informatiove, focused and eloquent answers. Watch some of the videos below and check the UStream for more live footage from the Infowars crew at The Grove in Watford.


Go to this link on Infowars.
Posted by George at 11:10 AM No comments:

What is Happenning in Istanbul?

They gathered and marched. Police chased them with pepper spray and tear gas and drove their tanks over people who offered the police food in return. Two young people were run over by the tanks and were killed. Another young woman, a friend of mine, was hit in the head by one of the incoming tear gas canisters. The police were shooting them straight into the crowd.  After a three hour operation she is still in Intensive Care Unit and in  very critical condition. As I write this we don’t know if she is going to make it. This blog is dedicated to her.
These people are my friends. They are my students, my relatives. They have no «hidden agenda» as the state likes to say. Their agenda is out there. It is very clear. The whole country is being sold to corporations by the government, for the construction of malls, luxury condominiums, freeways, dams and nuclear plants. The government is looking for (and creating when necessary) any excuse to attack Syria against its people’s will.
On top of all that, the government control over its people’s personal lives has become unbearable as of late. The state, under its conservative agenda passed many laws and regulations concerning abortion, cesarean birth, sale and use of alcohol and even the color of lipstick worn by the airline stewardesses.
People who are marching to the center of Istanbul are demanding their right to live freely and receive justice, protection and respect from the State. They demand to be involved in the decision-making processes about the city they live in.

Posted by George at 3:10 PM No comments:

Why was a Sunday Times report on US government ties to al-Qaeda chief spiked?

In interviews with this author in early March, Edmonds claimed that Ayman al-Zawahiri, current head of al Qaeda and Osama bin Laden’s deputy at the time, had innumerable, regular meetings at the U.S. embassy in Baku, Azerbaijan, with U.S. military and intelligence officials between 1997 and 2001, as part of an operation known as ‘Gladio B’. Al-Zawahiri, she charged, as well as various members of the bin Laden family and other mujahideen, were transported on NATO planes to various parts of Central Asia and the Balkans to participate in Pentagon-backed destabilisation operations.
According to two Sunday Times journalists speaking on condition of anonymity, this and related revelations had been confirmed by senior Pentagon and MI6 officials as part of a four-part investigative series that were supposed to run in 2008. The Sunday Times journalists described how the story was inexplicably dropped under the pressure of undisclosed “interest groups”, which, they suggest, were associated with the U.S. State Department.

Maybe this is part of what the show of force in Boston was all about? Why does the writer think the government isn't preparing for just such an uprising? Later in the article the writer states "The eye-opening findings serve as a reminder that Americans’ deeply held beliefs about gun rights have a tendency to cross over into outright conspiracy theories about a nefarious government seeking to trample their constitutional rights..." But why is that a theory? Constitutional rights have been trampled, and will continue to be...

Three in 10 registered American voters believe an armed rebellion might be necessary in the next few years, according to the results of a staggering poll released Wednesday by Fairleigh Dickinson University’s PublicMind.
The survey, aimed at measuring public attitudes toward gun issues, found that 29 percent of Americans agree with the statement, “In the next few years, an armed revolution might be necessary in order to protect our liberties.” An additional five percent were unsure.
Eighteen percent of Democrats said an armed revolt “might be necessary,” as compared to 27 percent of independents and 44 percent of Republicans. Support levels were similar among males and females but higher among less educated voters...

Posted by George at 8:33 AM No comments:

A Taste of Things to Come...

Go here for videos of martial law in Boston on Cryptogon.
Posted by George at 6:21 PM No comments: 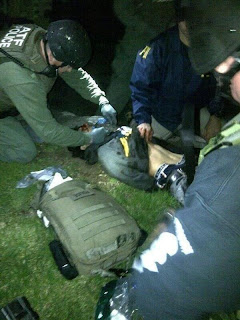 A whole city of millions in lockdown, wild police and military measures, because of a 19 year old kid, and what they tell us he did, without any proof. Sounds like freedom and democracy to me.

Posted by George at 4:29 AM No comments:

Mother of suspects says it's a set up....

Posted by George at 2:08 AM No comments: 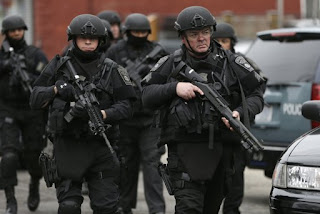 This is the guy they say did Boston, and I've got a bridge to sell ya....

Have a look at this article on Gawker, and then tell me you still believe in what we are being told....
Posted by George at 3:50 PM No comments:

‘The free and democratic world is supporting extremists,’ Sister Agnes-Miriam said from her sanctuary in Lebanon. ‘They want to impose Sharia Law and create an Islamic state in Syria.’

Posted by George at 4:40 AM No comments: