From Mary Tyler Moore To Lies Which Start Wars...

Posted by George at 4:11 AM No comments:

Today we received unconfirmed reports that over one hundred blue collar police refused to come into work in solidarity with our movement. These numbers will grow. We are the 99 percent. You will not silence us.

Posted by George at 1:20 PM No comments: 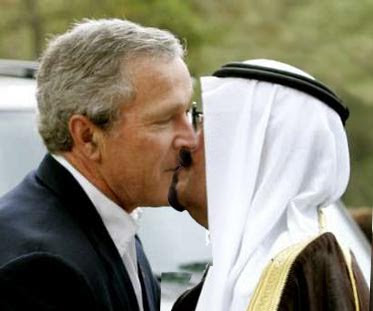 
A Lloyd’s insurance syndicate has begun a landmark legal case against Saudi Arabia, accusing the kingdom of indirectly funding al-Qa’ida and demanding the repayment of £136m it paid out to victims of the 9/11 attacks.

The Brighton-based Lloyd’s 3500 syndicate, which paid $215m compensation to companies and individuals involved, alleges that the oil-rich Middle Eastern superpower bears primary responsibility for the atrocity because al-Qa’ida was supported by banks and charities acting as “agents and alter egos” for the Saudi state.

The detailed case, which names a number of prominent Saudi charities and banks as well as a leading member of the al-Saud royal family, will cause embarrassment to the Saudi government, which has long denied claims that Osama bin Laden’s organisation received official financial and practical support from his native country...

The legal claim states: “Absent the sponsorship of al-Qa’ida’s material sponsors and supporters, including the defendants named therein, al-Qa’ida would not have possessed the capacity to conceive, plan and execute the 11 September attacks. The success of al-Qa’ida’s agenda, including the 11 September attacks themselves, has been made possible by the lavish sponsorship al-Qa’ida has received from its material sponsors and supporters over more than a decade leading up to 11 September 2001.”

Posted by George at 4:22 AM No comments: 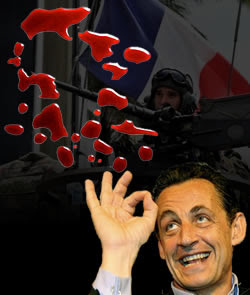 Oh weren't we supposed to be helping the 'civilians' who are now fighting your islamist radical forces dear Obama, Sarkozy, and Cameron? They don't want to be ruled by your brutal 'freedom fighters?' Just keep hiting them with the Apaches and killing lots of civilians and you will eventually get your oil. Such 'good guys.' There are claims in the article you killed 357 civilians overnight. But that means nothing. Hell, you will kill thousands, hundreds of thousands, and still sell yourselves as 'peace makers.'


"There have been heavy clashes since this morning," NTC fighter, Mahmoud Terbelu, said as he stood in the middle of a large roundabout littered with bullet casings.

"There has been some resistance from civilians, volunteers. They're above the buildings with Kalashnikovs, anti-aircraft guns, rockets and other weapons," he said...


Many fighters said sniper fire still posed a challenge to the advance as well as the presence of civilians.

Gaddafi spokesman, Moussa Ibrahim, told Reuters on Saturday that NATO airstrikes on Sirte had killed 357 civilians overnight -- an allegation NATO said may be unfounded.
Posted by George at 2:24 AM No comments:

Obama appointed Phillip Zelikow, the Director of the absurdly flawed and discredited 9/11 Commission, to his Intelligence Advisory Board. Zelikow was also earlier involved in a terrorism study group in 1997/1998 which predicted the consequences of "an act of catastrophic terrorism that killed thousands or tens of thousands of people and/or disrupted the necessities of life for hundreds of thousands, or even millions, [and] would be a watershed event in America’s history." Zelikov also drafted for the Bush administration the new national security strategy of 'preemptive attack."

President Obama also appointed Mona Sutphen, a close contact and colleague of Clinton's National Security Advisor Sandy R. Berger. Sutphen was managing director of Stonebridge International, "a global business strategy firm" formed by Mr. Berger. Mr. Berger was also convicted of the removal of crucial 9/11 documents from the National Archives at the time the 9/11 Comission was reviewing documents associated with 9/11.

On this linked webpage you can read one comment theorizing "zelikow and Sunstein's 'Obama propaganda ministry'[OPM] will be dealing with recent ripples in pool out of Florida, which, if opened by 'new investigation' [sen.Graham], would HAVE to deal with continued suppression of explosive information..."

In addition: It is interesting to watch the following Council on Foreign Relations video where Zelikow recently spoke about 9/11 and the continuing War on Terror. Zelikow speaks assuredly and seemingly smartly about 9/11, yet to anyone who has looked at the facts surrounding 9/11 it seems as if the CFR and Zelikow are living in their own world of manipulated facts. Just to use one example: At 12:00 minutes in Zelikow talks of how it is not known if there was a support network for the terrorists inside the U.S. However we know that an FBI informant was helping the terrorists as well as influential Saudis. Zelikow also wishes to tie (14:00) Iran to actions aiding the terrorists in their travels by lax control over their visas and border controls. However we know that the U.S. itself could be accused of this, in their 'negligence' at the consulate in Jeddah, Saudi Arabia, where the cross border travels of Al-Qaeda and the hijackers themselves were apparently purposely aided.

Posted by George at 4:38 AM No comments:

Probably the best video on 9/11 I've ever seen. It seems clear to me at least that 9/11 was the first step by a financial military industrial network towards a kind of world authoritarianism and perpetual militarism. The video below makes no speculation of the sort however and simply presents the opinion of many experts and why they must doubt, due to scientific fact and reasoning, the official story presented to us from the corporate mainstream media and the political establishment.

The corrupt bankers and warmongers walk free, but jail those amish! 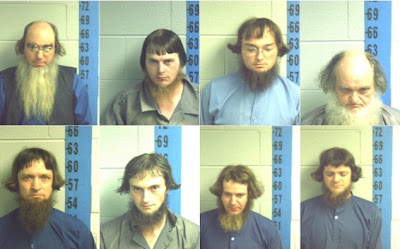 The news is going around about eight members of an Amish sect in Graves County, Kentucky who are serving several-day sentences for refusing to put reflective orange triangles on their slow-moving vehicles. Their faith apparently denies the display of loud colors.

[Update: They weren't jailed right away. They got jail time because they wouldn't pay the fines that they got first. Sorry for the confusion.]
Posted by George at 4:16 PM No comments:

Who would have ever thought that by arming and supporting extremists, they might take over? Well, that just is sooo surprising. Mr Fogh Rasmussen must be just so surprised at these developments.

Libya is in danger of falling into the hands of Islamic extremists if a stable government is not rapidly established, Nato’s secretary-general warned last night.
In an interview with The Daily Telegraph, Anders Fogh Rasmussen said Islamic extremists would “try to exploit” any weaknesses created as the country tried to rebuild after four decades of Col Muammar Gaddafi’s rule.
Mr Rasmussen was speaking amid growing evidence of splits in the rebel leadership in Tripoli. His words will cast a damper over the euphoria sweeping Tripoli in the wake of the revolution...
Posted by George at 3:57 PM No comments:

In New York City, truth is a crime.

Visit msnbc.com for breaking news, world news, and news about the economy

Former Democratic Senator Bob Graham on Monday called on the U.S. government to reopen its investigation into 9/11 after a report found that links between Saudi Arabia and the hijackers were never disclosed by the FBI to the 2002 joint Congressional intelligence committee investigating the attacks.

“In the final report of the congressional inquiry, there was a chapter related primarily to the Saudi role in 9/11 that was totally censored, every word of the chapter has been withheld from the public,” Graham said on MSNBC’s The Dylan Ratigan Show.

Posted by George at 1:20 AM No comments:

Is Libyan War A Planned Step Towards Wider Regional War in Middle East?

That's the thought that occurred to me after reading two articles from Ynet News. First you can read how the largely western supported 'Arab Spring' is being seen by a top Israeli general as leading to an "all-out, total war, with the possibility of weapons of mass destruction being used." So the west encourages a process which then gives the Israelis an excuse to nuke their arab neighbors? Another article from the same website explains how weapons are flowing from territory the American and Nato supported Libyan rebels hold, straight into Gaza. Thus Nato can be seen also here as aiding the path towards war. Could it be that a wider regional war is exactly what the powers in the West want?
Posted by George at 4:38 AM No comments:

Posted by George at 2:38 AM No comments:


See also Petrodollar Warfare
Posted by George at 1:53 AM No comments:

“Labor Day” should be renamed “Corporation Day” or “War Day”

Labor’s Demise As A Countervailing Power

It is Labor Day weekend, 2011, but labor has nothing to celebrate. The jobs that once gave American workers a stake in capitalism have left and gone away. Corporations in pursuit of near-term profits have moved labor’s jobs to China, India, Indonesia, Taiwan, South Korea and Eastern Europe...

...Obama was elected in order to stop the illegal and senseless wars. Instead, Obama both continued the wars in Iraq and Afghanistan and expanded the wars into Libya, Pakistan, and Yemen. Since the deregulation of the financial system under the Bush/Cheney regime and the “war on terror,” the entire economy of the US has been sacrificed for the benefit of the financial sector and the military/security complex.
Labor Day is an anachronism. It should be renamed Corporation Day or War Day to celebrate the success of Bush/Obama in eliminating labor unions as a countervailing power to corporate power and the elevation of War as the highest goal of the American state.
Posted by George at 1:50 AM No comments:

Posted by George at 9:40 AM No comments: 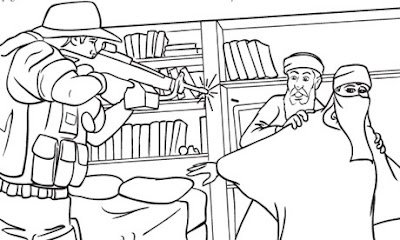 
Come on kids, let’s go for a ride on the triceratops and then we’ll go buy us some frozen pizzas at CostCo. Later on, if yer’ real good, you’ll get to hear the one about how the Navy SEALs killed Bin Laden again.
Gee, thanks, Dad!
Posted by George at 3:21 AM No comments:

This gaggle of fanatics, psychotics, and criminals is billed by the CIA media as an effective ruling elite for the future democratic governance of Libya. In reality, the Benghazi rebel council, heavily larded with al Qaeda terrorists, could only preside over the descent of the country into a chaos of tribalism, warlords, and criminal syndicates which would spell the end of civilization itself in the area. Precisely this appears to be the goal of US policy, and not just in Libya.